Well, free after it pays for itself

We are on the road to the promised land of free energy, although we haven’t arrived yet.

The road has been paved with mistakes and we’ve had to learn a lot about electrical systems in general – something neither me nor my husband had a clue about beforehand.

Installing our solar power system is ongoing because we’ve botched some things and realized what we started off with was inadequate. When we’re finally done, we expect to be totally independent of all sources of energy except for the sun with the occasional use of the gasoline generator.

Starting out, we ordered a four panel package with one charge controller and an inverter but it was inadequate to power even our fifth wheel. We then ordered two sets of four more panels with their own controllers to augment the first. Then we focused on lowering our energy consumption.

We changed out the regular for LED light bulbs and replaced our electric water heater with a gas one. The electric fridge needs to go but propane models are super expensive. The fridge is currently hogging about seventy-five percent of our electricity!

Last week we replaced the 1500 watt inverter with a 3000 watt size after we learned that we were using beyond 1800 running watts (the amount of watts being pulled at any given moment) per hour and that some appliances can temporarily exceed that or “spike” at certain times like when they kick on. Such spikes will cause the inverter to shut down.

When we installed the new inverter and plugged the trailer into it, it would immediately trip and turn off. We’re looking for the cause.

We ordered larger gauge cables for the batteries and found out we were supposed to use the same length cables between each, which we weren’t doing. Apparently, that’s a safety issue so I recommend researching this stuff beforehand or calling the manufacturer to clarify on all aspects of your system. 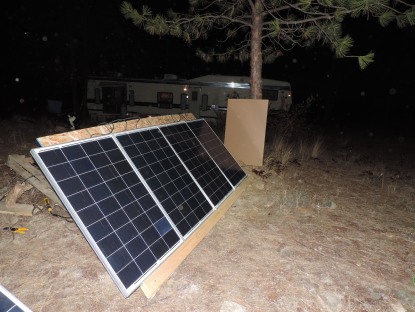 We also had eight panels running through one controller which is another big no-no.

Today we received our latest four panels making a total of twelve. We spent the entire afternoon setting up a temporary stand for them on some boards, setting the panels up and wiring them in.

Then it didn’t work.

As of this evening, we’re still checking all of the connections with no luck so far. Dark fell so we’ll finish tomorrow.

We bought a small garden shed to keep the batteries and other equipment in, built a bench for the battery array and put up a shelf for the inverter.

Despite the challenges, I’m really excited to get all of this up and running. Independence is right around the corner and I believe we’re on the homestretch.

I see a “light” at the end of the tunnel.

I am an eccentric blogger and artist. I currently live off-grid which makes for some great stories. :) View all posts by ldinlove

This site uses Akismet to reduce spam. Learn how your comment data is processed.