About a year ago, I found a broken and rusty bracelet in the farmer’s dump on our hillside. It’s embossed with a boy’s name.

Bottles and jars are cool to find intact but whenever I’ve uncovered something personal, it’s always gotten me to thinking about the person to whom it belonged to and what life was like when they lived here so long ago.

Our property had not been occupied since about 1957 until we moved in. Back then, people threw their trash in dumps right on their land. Their trash is now my fascination – but back to that bracelet.

I wondered who this kid was and I figured there was a chance he might still be alive so I looked through the list of previous owners and did some additional detective work on the Internet and found him! He is 80 years old and still lives in the state.

I prepared a script before I dialed his number and he actually answered the phone. I felt a bit awkward but I asked him if he had lived where we are now and he confirmed it. I told him we had bought his family’s old property and I explained how I’d sifted through the old garbage heap on the hillside and found many items that were most likely deposited there by his family.

I told him about the bracelet with his name on it and asked him if he remembered it. He hadn’t, to my slight disappointment, but he was friendly and open to conversation.

I described the horseshoes, TV dinner containers, bottles, toys, and marbles we’d unearthed and questioned him as to whether or not he remembered them. He mentioned he had two older brothers who might have been the marble’s owners.

I told him I was using what may have been his Mother’s can openers and how what might have been her egg beaters were now growing into the side of a tree. He laughed and told me he was nine when his family moved here.

The call was very pleasant although, for him, it had come out of the blue. I said goodbye and thanked him for his time. Although he didn’t recall everything, I’m hoping he’d hung up the phone with some old memories rekindled.

It felt nice to make a connection with someone who had shared the history of this property with us. It once was his own.

I forgot to ask him if they had a well and where it was located. The privy too. Those are supposed to be treasure troves!

My husband calls them The Horde.

They are the collection of wild turkeys that cruise the area searching for food and doing whatever else turkeys do. They seem to live in loose groups and there’s no shortage of them here in eastern Washington.

We often wake up in the morning to the sounds of hungry fowl outside our windows. They surround the RV (have you seen the Alfred Hitchcock movie The Birds?) making their expectations plain – it’s breakfast time.

My husband knows his job: He roles out of bed, throws on some clothes, grabs the thirty-pound bag of food with the cup and steps outside to feed “his” flock. They chitter, pip, pop, peep and sometimes gobble loudly in unison while they skirmish over the offerings.

They nip at each other, driving away their competitors for every bit of seed. Some are scraggly, some look a little sick and it makes me sad. Nature is nature though. I throw food to the ones who look like they need it the most. The rest look pretty healthy aside from the wind-tunnel look. 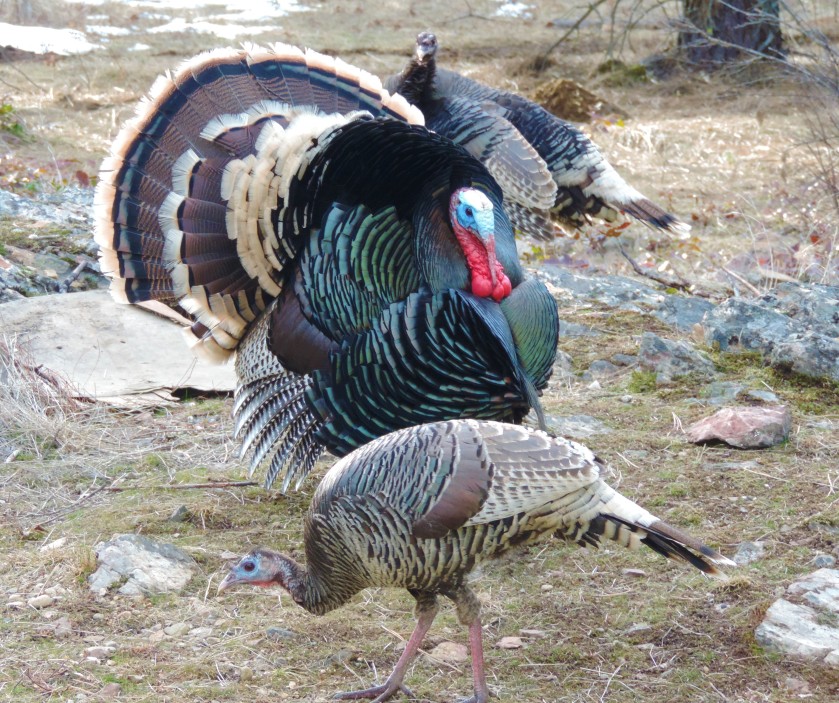 We started feeding them a couple of months ago. When we pull into our driveway they make a bee-line to our RV. Most are hens but the males are standing out this time of year.

It’s the beginning of the mating season and the Toms are dressing up in full window display. To make themselves look most presentable to the females, they “fluff up” with an audible swish of their feathers. Their heads flush with color and somehow they manage to cause their plumage to stand upright.

They angle their tale swag from side to side, as if tuning in a radar array. They tuck their chins in and glide across the ground as if on wheels. Or they stand stock still while the hens ignore them. Somehow, despite the rejection, little hordes inevitably appear in the following weeks. We call them gobblets.

You people with your sidewalks and your manicured lawns – I envy you right now. We moved onto raw land on purpose but I didn’t anticipate having to train for a cross-country event just to get to the car.

At this time of year, when the snow melts and the ground is still frozen, our property becomes a quagmire.

Imagine plopping down somewhere in the woods to live. Wherever you walk, you trample the grass down leaving only dirt, then mud, when it rains. Everywhere you drive, the same. Without driveways and sidewalks – mud is what happens.

To get to the car we have to zigzag between patches of snow, muck, and the boards we put down to prevent us from leaving our boots behind.

We’d be stuck here without four-wheel drive and we meet in the war room to strategize our route out before we hop in the car The Long Long Long Driveway.

It’s almost spring and water from the melting snow is trapped on the surface by an under-layer of permafrost. It has nowhere to go and mixes with the trampled or driven-upon topsoil to create a real mess.

Where pools of standing water form, we discovered that hammering holes through the frozen ground to the unfrozen earth below allows the water to drain. Where that doesn’t work we cover the goo with boards or fill it in with rocks.

Until the thaw is complete and all of the snow melts, I put on my rain boots no matter the outfit. At least I fit in here in rural America.

I don’t scare easily but the coronavirus outbreak is a little bit different.

I have asthma so I am one of those people with an underlying condition and am theoretically at higher risk for complications or death. I have significant problems breathing some mornings and a little bit of exacerbation would not be a good thing.

I’m glad we’re out here away from town and not in close contact with other people. Our plan is to stay put for as long as possible when the crap hits the fan – which it will. I don’t know what the life cycle of this virus is so perhaps we aren’t being realistic. Still, minimizing our exposure to others seems prudent.

Today we stocked up on things that would help us stay comfortable for longer on our own. We grabbed a bunch of canned dinner-type items such as spaghetti and meatballs – things that provide protein but will keep indefinitely. A bag of potatoes and sweet potatoes seemed like a solid idea also.

We meant to buy some hand sanitizer but it was already sold out. Instead, we grabbed a few bottles of alcohol and some wipes so we could make our own version of sanitizing wipes – one for the car and one for home.

My husband grabbed the extra gas cans and propane cylinders to fill up.  Other than that, I’m not sure what else we can do. Our solar isn’t running at full strength but we can run most of our appliances and charge our batteries during the day.

We have plenty of wood on the property for heat and if it came down to it, for cooking over a fire. We have an unlimited water supply.

I looked up some natural antivirals and none are proven to be effective in warding off this virus but no proof doesn’t mean they don’t work. There simply isn’t evidence either way so we eat lots of garlic and I add coconut oil to my coffee for now – just in case.

Our entire school district closed this morning and some individuals are awaiting test results. The high school our son attends is being sanitized. I hope he isn’t sick.

If it wasn’t for my asthma, I wouldn’t worry as much but because I’m at a higher risk,  I’m ready to call the number that is listed in the local health department press release at the first sign of symptoms.

Being able to sustain ourselves for a good month is reassuring to me. But can we outlast the outbreak?